Setting an Intention for 2014

Self-Awareness
2013: I became aware that I was somewhat disconnected from myself in that I had many distractions and noise in my life. I eliminated many of those distractions and streamlined my focus in making a clearer connection to my yoga practice. This year I also made room for more alone time. Adopting Dhalia the cat was a big step towards connection in sharing my space with her but also recognizing that I needed my own room as well.

2014: I feel that the next step in my personal development is to build self confidence. I have so much to offer but often defer to others or undermine myself by giggling in nervousness when I really want to be clear and calm.

Self-Regulation
2013: Yoga has been a source of self-regulation in being more connected to what is happening in the moment and having less anxiety by creating fictional stories in my head. Also seeing increments and pieces that make up the whole to recognize many types of evolution in myself and others.

2014: Steps towards confidence come with contemplation, slowing down, breathing, listening, hearing, and then moving and deepening. I really want to feel that I can stop my nervous laughter and instead demonstrate clarity of ideas and actions - not being swayed into giggles out of fear.

Motivation
2013: I was disconnected from myself in that I was motivated to find something external with which to connect. I nurtured intrinsic motivation.

2014: I have so much intelligence, beauty, strength and ideas - and my motivation is to respect myself and my ability to motivate and lead.

Empathy
Creating these annual themes is a practice of personal empathy.

Social Skill
2013: I felt an easier connection with others this year because I was more loving of myself.
2014: Now to believe in sharing my abilities, to have confidence through clarity and calmness: that will improve my capabilities as a friend and teacher. 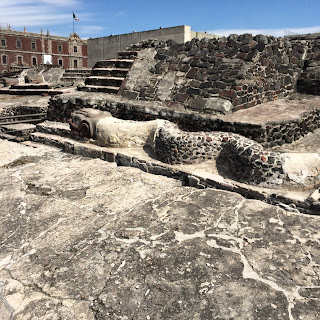 I am amazed how this pyramid is amongst the Mexico City Zocalo buildings. 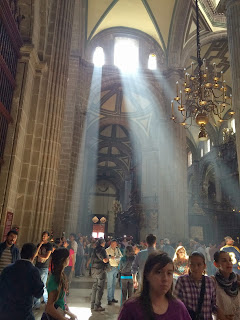 Beautiful lighting during the Sunday service.

Personal Practice Week 9 of 10: Smile and the world smiles with you

This week I am in Mexico City for my fifth visit. I love This city and always find new ways to deepen my experience. Unfortunately, I do not speak Spanish but on this visit I am finding that I can understand more of what people are saying. I am recognizing that positive attitude is everything when you visit a different culture.

Self-Awareness
I am aware that I am a foreigner who is demanding a lot from locals because I do not speak Spanish and I expect people to speak to me in English.

Self-Regulation
I could become frustrated about my lack of Spanish. Instead, I make eye contact wi people and smile at them. Plus, I maintain a light hearted attitude.

Motivation
My motivation is to one day learn Spanish and maybe even move to Mexico City for a while to teach. The more comfortable i am here, the more I feel like I can assimilate and not stand out.

Empathy
People here try to communicate with me and understand my needs. They show me empathy. The most generous example is when I was attempting to get to my friend Tesy's yoga class which was in the outskirts. Three taxi drivers in my neighborhood refused to make the journey. The subway allowed me to make a portion of the journey but I missed the class and realized I had to be kind to myself and let go of rushing.

At the destination subway station a taxi driver said he would venture to find our address. He repeatedly viewed the tiny map Tesy drew for me and which I showed him on my iPhone. It was an hour's adventure where he kept stopping the taxi and asking for help. When we finally made it to the area we were surprised by a gated community entrance and the driver had to do his best to explain my needs. However he could only give a general explanation because he and I could not communictate in a common language. When we got passed the guards we drove in circles around this private community and finally I got out and said thank you.

Along the entire journey we laughed at our lack of common language. I think that this positive attitude helped our predicament. I paid him twice the fee for his time and empathy, plus the time it would take him to get back to where he could find a customer. A minute after the driver drove away a guard on a bicycle frantically drove up and said in English, "Americanos, here is the place you are looking for, my name is Fernando, I will get you there." It turns out the yoga studio was a few steps away. How kind of him to help us and thoughtful of our taxi driver to have told the guards of our predicament as he was leaving the compound.

Social Skill
This whole adventure is about developing social skills. The key is listening closely, using hand gestures, making eye contact and being relaxed about the interactions. Also, being comfortable asking for help. Working in as much Spanish as possible is also a plus. 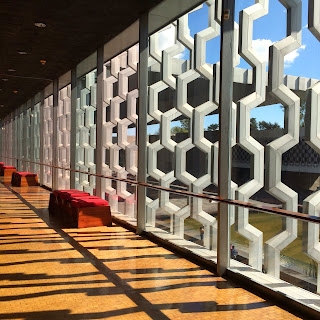 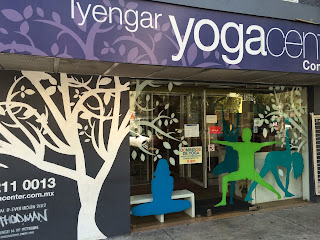 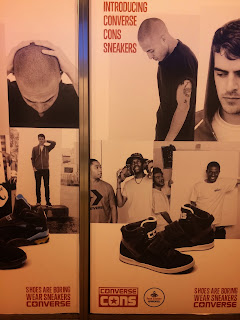 That is what I always think when I see this advertising campaign plastered over the walls and floor is the Oakland Collesium BART station. I do not understand the lifestyle Converse is promoting or the people they are targeting.

For years I have used the GROW coaching tool and this morning I woke up with an advancement by adding an "S" to the end making it GROWS. The S is for success - the indicators that your goal has been met and the impact of reaching your goal.