I went to see Spamalot last night with Rene in San Francisco. It was his first time at the show and my third, having seen it in London and Las Vegas. By far Vegas was the best performance. Perhaps it was my fourth row seat and King Arthur being played by John O'Hurley (who was supposed to be in last night's show but was replaced by an understudy).

Last night, unfortunately the woman in front of me leaned forward for the entire performance so that I had to constantly dodge back and forth to see the action. I wanted to gently take her shoulders and pull them back. This is what makes live theatre so different from sitting on your couch.

The beauty of live theatre, audience and all, is that potential for spontaneity. Each performance is different because of the chemistry between actors and audience. Last night's show had a particularly wonderful moment when the Knights Who Say Ni changed to the Knights Who Say Mama-se, mama-sa, ma-ma-coo-sa, the famous chorus from Michael Jackson's "Wanna Be Startin' Something." 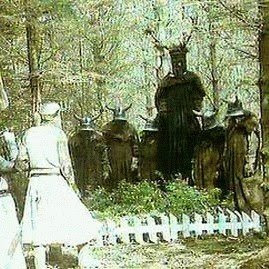 The audience took a collective sigh and the actor then said, "it is so hard to say good bye to the King of Pop. He touched so many people." This made us all laugh. It was the perfect adieu to such a theatrical and mysterious pop icon.