Ike the Bike on the Angel Island Ferry 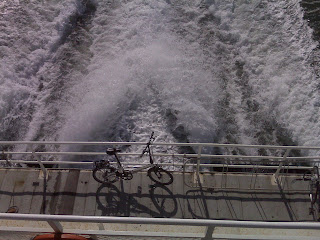 I took Ike the Bike on an Angel Island hike today with some friends and my cousin Ben. (Say that ten times fast). Angel Island sits in the San Francisco Bay very close to Tiburon on the Marin coast. Our little group met at the Oakland Ferry which we took to San Francisco Pier 41, then switched ferries to take us to Angel Island. We managed to then hook up with some of my parents friends who were visiting from Stamford, Connecticut. The most amazing thing about this day was that I only knew Ben and by the end I had six new friends.

Here's Ike on the ferry. He is just loving the views. Can you see him smiling? When we got to the Island I left him by the ferry so that he could admire the other cyclists as we hiked.

Sent via BlackBerry by AT&T