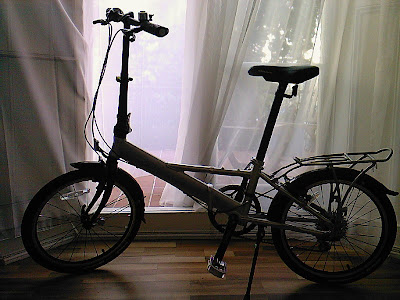 Check this out - I won a folding bike from Time Out London magazine. I didn't want to reveal it until the bike was actually in my hands. Here it is - a Ridgeback Emmisary. Seven speeds, came with a rack and has its own bell. Would you believe the contest was sponsored by British Gas? How ironic.

Rode the bike home today along the Canal from Kings Cross to Paddington. Took me 50 minutes door to door including 10 minutes of walking the bike from my office to the canal. That's much better than the two hours it takes me to walk. Now that the Tube is getting steamy, no air conditioning and it seems to be facing constant delays, the bike is a super alternative.

Quick lessons learned include braking is opposite to the US. Left is back and right is front. Plus, I immediately learned to ride on the left as I nearly caused several water crashes. Also, ring that bell. Going under overpasses takes some care as well - they have low head room.

The best part is that I feel free for the first time in London - and - people smile at me. Some even said Cheers when I let them pass. I am happy as a lark. The bike rides like a dream.

I'm thinking of naming it Ike the Bike although am tempted to call it George like my Houston Scion.