Getting in Touch with Books

Today I attended the London Book Fair. It sounds fantastic but I was actually dreading the visit. Last year was my first time there and it was overwhelming. You would think that seeing thousands of publishers displaying probably a million books would be fantastic. The wrinkle is that this is not an event for the public - it is a wheeling and dealing hot house for authors and publishers (probably agents too). Although our company is a publisher I work on the strategy side and not the actual publishing itself. So for me the London Book Fair is really just a big tease - look but don't touch because you can't buy. Kind of like a museum.

Why did I go, you ask? Because you do get to hear the latest news on e-publishing, blogs and copyrighting. That's the business development strategy side stuff that I think about in my day job.
Well, I did find some interesting things to do. I settled into a fantastic food demo area and learned Moroccan cooking. The demo chef spoke in French and there was a highly animated translator who added his own twist to her words. It all seemed so safe and normal until the pitch at the end for someone to translate her nine books into English. After all, the audience members were publishers. 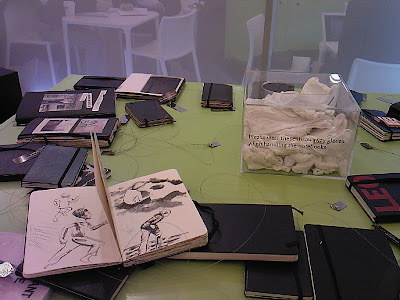 Another cool bit I discovered was the Moleskin notebook booth which had personal diaries on display. When I say personal I mean that they were diaries already completed by their owners - filled with thoughts, illustrations, collages and photos. Like being in a gallery they asked you to put on white gloves to handle the works. It was really quite special to take a peak into people's lives - their secret thoughts.
At first I figured that these were created by marketing professionals - but no, these were the real thing. There is a whole community committed to making art in moleskins and they have a series of blogs called The Moleskin City Notebook Experience. On them you can see notebook postings from folks who love to use Moleskins to express their art and exhibit their creations online and in galleries. There are Moleskin City blogs for Barcelona, Berlin, Milan, New York, London, Paris and Rome. So cool!
There is a special exhibition of Moleskin City works on tour called Detour. Proceeds from their works support the non-profit Lettera 27, an organisation with the mission "To support the right to literacy, to education, and the access to knowledge and information, all over the world and especially in the most deprived areas." 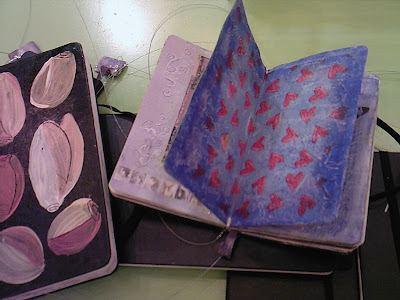 My take-away from the day (besides food samples) was that there is something wonderful and special about touching a one-of-a-kind book as opposed to leafing through publications that have never been touched by humans. Like the illuminated manuscripts these Moleskin creations have a special meaning for their creator and a preciousness for their reader. I suddenly looked at the little notebook I carry around with me and realized it was so much more special than just a place that I jot down ideas. It has the potential to illuminate all my secret thoughts, musings, ideas and inspirations. Everything is illuminated.