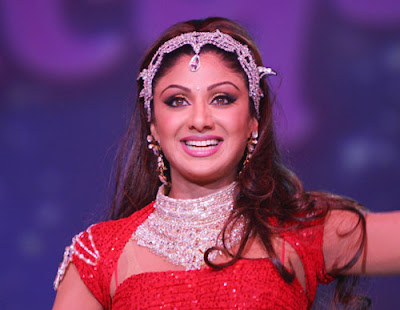 Dazzled. That's all I can say. Dazzled. Just got back from Miss Bollywood the Musical and my heart is still pumping. I was lucky enough to get front row seats for the performance at Royal Albert Hall. What a seat. Because I went solo (do you think I would submit anyone else to an over-the-top musical?) I was able to get the last seat in the row. It was fantastic!

I could see the actors' expressions, see the details in the costumes and even get to dance with one of the dancers when they came down into the audience for the final scene. My dancer tried to get the two people next to me to dance. I reached out and I'm sure he thought, "can she dance?" well yes! I showed them. I went for a full two minutes of rocking dancing.
The performance featured Shilpa Shetty who was already one of my favorite stars. She proved to herself to be a loving person when she won Celebrity Big Brother last year despite the horrible bullying she received from other housemates because she is Indian. Shilpa proved herself to be a loving and forgiving person and it was apparent from her presence on stage tonight.
At intermission I saw a bracelet on the floor - a piece of costume from the show. I picked it up and placed it in my pocket. On stage it was glistening and off stage it was just a simple piece of plastic jewelry. That was the magic of the show - spectacle and event.