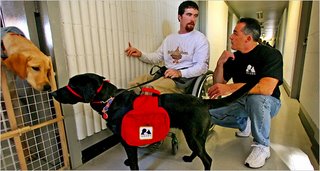 Today's New York Times has an article about guide dogs trained by inmates, "Trained by Inmates, New Best Friends for Disabled Veterans" by Stephanie Storm. Although the article focuses on the advances in services that the dogs offer - aiding in walking and wheelchair movement - I am more fascinated by the training component.

What a tremendous idea to utilise inmates to train the dogs. From the article:

It takes about half the time to train dogs in prison as it does in foster homes, Ms. O’Brien said, because of the more intensive training they get from inmates.

Inmates are enthusiastic about the program. “It’s great to do something that really helps someone else, especially a guy like him [the veteran],” said Thomas Davison, who trained Rainbow at the Northeast Correctional Center here. “I’ve never had a chance to do that, and I wasn’t sure I could handle the responsibility.”

Kathleen M. Dennehy, the state correction commissioner, said the program had profound effects on the culture of a prison.

“Officers stop by to pat the dogs, they smile, maybe they strike up a conversation with the inmate training the dog,” Ms. Dennehy said. “It establishes a basic human connection.”
James J. Saba, superintendent at Northeast, is unsure, however, whether the program, already in six prisons in Massachusetts, can be expanded.

“We have 268 inmates in this prison alone, which is already too many,” Mr. Saba said. “And for every puppy, we lose a bed because the dogs take the place of an inmate in the cell.”

Mr. Paquette and Rainbow visited Mr. Davison and the four other inmate trainers at the prison on Thursday. Mr. Davison gave him a few pointers and handed over the toys he had bought the dog with the $28 a week he received for training her.

Investing in programs that allow inmates to build confidence, social skills and provide a service creates a positive opportunity out of a negative situation. The fact that this inmate spent his small pay on toys for the dog is a selfless act that illustrates his commitment.

Learn more about NEADS - New England Assistance Dog Services. They also innovative when it comes to fundraising, offering the opportunity to purchase naming rights for the dog. Rainbow, the dog featured in the New York Times story, was named by a troupe of Rainbow Girls who raised $500 from pancake breakfasts to help underwrite her purchase and training. I admire this organisation's vision for galvanizing communities and individuals towards a common goal.