Finally we delved into the world of arts, culture and cuisine with a full Saturday of adventuring. Now there is no turning back.

We began with a visit to Frieze Art Fair in Regent’s Park. Lasting merely four days the fair is housed in a giant tent that is transformed into a shopping mall of art galleries. Row upon row of exhibitions featured some of the world’s most contemporary artworks. My sister and I say that when you are in the Mall for too long you are afflicted with Mall Blindness. Everything starts to blend and your brain shuts down. But remarkably and unexpectedly this did not happen. Stephen and I pretended have a budget and were shopping for pieces to place in our living room. Of course nothing had prices – dahling if you need to ask you can’t afford. The most popular subjects seem to be sex and we’re not talking pretty. I also managed to keep my inside voice quiet for all but one comment - "they call that art?"

Next we walked over to the British Library which is a spectacular piece of architecture. The library features two galleries – one that has changing exhibitions and the other Sir John Ritblat Gallery: Treasures of the British Library which permanently displays the most amazing publications. I saw live and in person (Note: order of importance is set by Amy and not by historians) Shakespeare’s original folio of plays, Lewis Carroll’s handwritten Alice in Wonderland, the 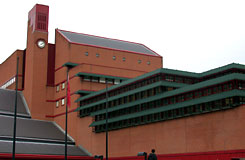 Magna Carta, a golden Haggadah, and the actual stamps that set off the Boston Tea Party. Additionally, the library has a Philatelic exhibition featuring 80,000 stamps and envelopes. [Images of the British Library from the COLIN ST JOHN WILSON AND PARTNERS website. The taller bui 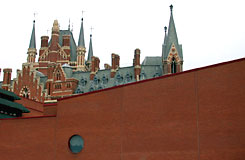 lding in the background is King's Cross Station]

Our day continued at the Hampstead Theatre to see the staged version of Jonathan Safran Foer’s Everything is Illuminated. I’m officially a Safran Foer junky having now read both his books, seen the movie and stage versions of Everything is Illuminated and having heard him read in San Francisco. I can’t get enough of this guy. The play was outstanding. It was written by Simon Block and was more in the spirit of Safran Foer’s original text than the movie – although I enjoyed both.

How did we complete this tremendous day of the arts? Why at Benihana restaurant of course! It was the only place open for dinner near the theatre at 10pm. Okay, we love the drama of Hibachi cooking. The food was excellent and so was the chef entertainer. Except I wasn’t up for him chucking overcooked tuna at my mouth – perhaps after a bottle of wine it would have appealed. The other diners at our table went all out and ordered one of everything on the menu. They were nice enough to offer us their untouched sushi which I reluctantly devoured. It was delicious.

You ask me to report to you on the arts and this is what you get. Full Frontal Arts Reportage! Stay tuned as Stephen and I explore Paris next week. This week it is back to job hunting.