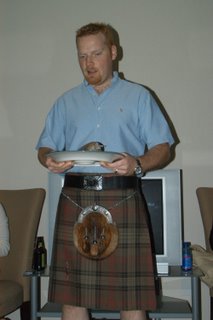 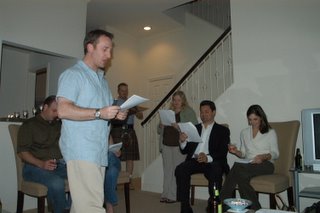 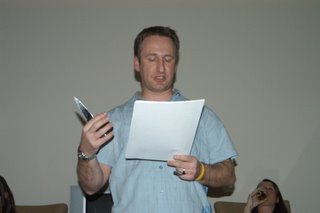 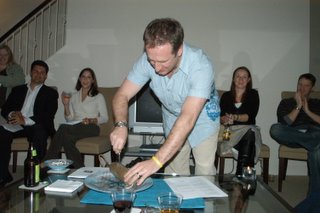 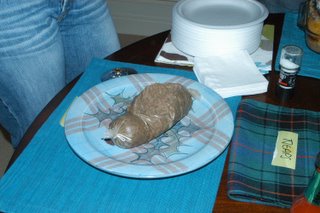 January 25 is the birthday of Scottish poet and bard Robert Burns. To commemorate this national hero Scots and Scot-wanna-be, like myself, participate in a dinner called a Burns Supper.

Featuring Burn’s poetry, written between 1759 and 1796, during his short life of 37 years, the guest of honor is always haggis. Here in American we really don’t know how to make haggis and the few we’ve tasted here are really quite gross – identifiable chewy bits throughout.

Stephen’s work associate Collin (pictured here in the kilt) and his wife Lindsay hosted a supper for their work associates. The guests were a mix of Scotts and Americans. But we all could appreciate Auld Lang Syne, Burn’s most famous poem.

The evening began with the haggis being piped into the room with Collin as its escort. Stephen then performed “Address To A Haggis” which is an Old Scottish English poem that peaks with the stabbing of the haggis. Not the best way to treat an honored guest.

Stephen spoke beautifully. I had never heard him use the rolling “r” – sounding very ancient and lyrical. We all thought he was possessed as his booming voice and dramatic gestures culminated in the stabbing.

We then ate the American haggis which was produced in Florida. There were more poems including this one that Stephen was kind enough to dedicate to me.

As fair art thou, my bonnie lass
So deep in luve am I
And I will luve thee still, my Dear
Till a’ the seas gang dry

Till a’ the seas gang dry, my Dear
And the rocks melt wi’ the sun!
O I will luve thee still, my Dear
While the sands o’ life shall run

And fare the well, my only Luve
And fare thee well a while!
And I will come again, my Luve
Tho’ it were ten thousand mile