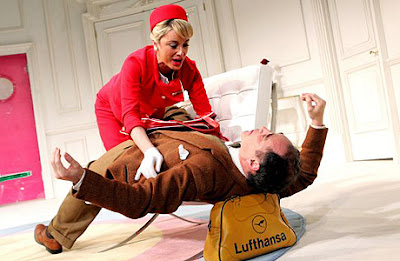 There is no excuse for living near good theatre and not going. Our friend John suggested that we "take in some theatre" while he was visiting from San Francisco. Using the internet, within five minutes we had tickets booked, half price, for the next day to see a West End hit.

We jetted off to see Boeing Boeing which is a traditional British bedroom farce. A French man figures out how to maximise the travel schedules of flight attendants so that he can have three women - one from Italy, one from America and one from Germany.

As you can guess it went wrong. The results were very amusing. What I really liked though was how the American flight attendant was depicted - big everything, little girl voice, blonde hair, sex crazed and a good business woman. She was inspirational.