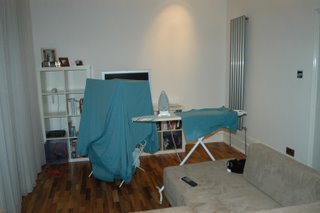 While in the process of looking for a job I'm trying to "add value" in the flat by honing my domestic skills. In my entire life I don’t believe I ironed more than two items. Well, this week I’ve used the iron three times – and haven’t burned anything yet!

Ironing can become an obsession. I’m carefully steering clear of that tendency. Frankly, I like my clothes a bit wrinkled – adds texture and character to your outfit. Stephen on the other hand is into the ironing thing. In the past, whenever I had something ironed – such as a horribly crumpled pair of pants that were almost given to charity, I would put it in his pile and he would generously iron it back to wearability. It took him hours but he would always be watching sports and have a beer nearby.

I’ve taken up other clean habits such as cleaning the bathroom floor, wiping down the kitchen counters, picking up pieces of lint from the floor (we don’t have a hoover yet), and even pre-rinsing items to go into the dishwasher. But this behavior could easily drive me insane. The cleaning never ends. You would have to stop wearing clothes and eating in your kitchen to ever reach success.

Suddenly your domestic partner is someone you hope will notice all your hard work and thank you for it. “Did he realize I ironed the crease back into his pants?” Or worse, “he left a crumb on the counter and I just cleaned that bloody thing.”

Do you like the use of British terms peppered here and there into the writing? You actually can’t help it. I found myself thinking in a British accent. Is this the downward spiral Madonna took? It all started as Mrs. Guy Ritchie and I’m sure the next phase was ironing.