Sounds like something out of the Middle ages but its true. Last month a cesspool in Huntington, NY - Long Island or as we say lawngeyeland - opened up in a man’s yard as he stepped out during a rainstorm to get his Sunday newspaper. His son and neighbor tried to help him escape but they too were sucked into the crevice. Firefighters finally extracted all three. The poor fellows were covered with raw sewage when they emerged.

Who the heck thought of creating cesspools in Long Island? Can you think of anything grosser (except Palmetto bugs which is another story)? Okay, septic tanks make the list. 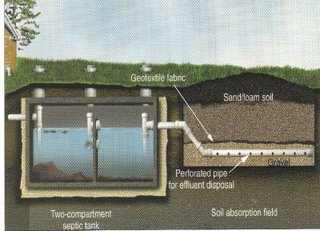 My folks have a septic tank in their yard in Connecticut. Every couple of years my dad has to get a contractor out to pump the tank. They know where to dig up the yard to access the top because the grass is always greener over the septic tank. I recall my dad advising us not to use the toilet too much during rainstorms because the tank could flood. Who the heck invited septic tanks?

In case you are wondering how these things work...

NOTE: This page is intended to be a resource for helping you to understand and maintain your septic system so that it will function at optimum efficiency and with a minimum of service.
The systems we address here are of the type commonly in use on Long Island , NY

WHAT IS THE DIFFERENCE BETWEEN A CESSPOOL AND A SEPTIC TANK?
A septic tank is a chamber through which all waste water from the home passes. The tank collects the water and allows the heavier solids to sink to the bottom forming a "sludge". Lighter solids such as soap, grease and oil rises to the top and forms "scum". Natural bacterial action works on the solids, helping to break them down.

The tank's design keeps the solids from flowing out with the residual liquid, called "greywater", into the cesspool drain 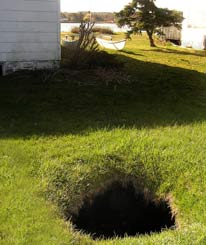 age area where it leeches into the soil.

Cesspools (or leaching pools) are pits into which concrete, brick or cement block walls have been placed. Wastewater flows into the cesspool and drains or "percolates" into the soil through perforated walls.

Cesspools which serve only as "overflow" pits from septic tanks are much more efficient than the older systems because they receive much less solid material. However, where there is no septic tank to hold the solids, the cesspool will require much more maintenance. Over time, when the drainage area around the leaching pool becomes saturated, additional pools may have to be dug to handle the volume.

OLDER (BLOCK OR BRICK CONSTRUCTION) CESSPOOLS
If your septic system was installed prior to 1975, it is likely that the cesspool(s) are constructed of cement blocks and / or brick. This type of construction is problematic as cesspool walls can weaken over time, leading to possible collapse.
To avoid problems you should:

Know the location of your cesspool(s) and limit foot traffic in these areas. Children and pets should be discouraged from playing above or around the cesspool.

Close these areas to all vehicular traffic. Do not park heavy equipment, boats etc. in these locations.

Note any changes in the ground above or near the cesspool. A sudden change in grade (settling), unusual puddling or wetness, odors or sinkholes are all symptomatic of a collapse or other problems. Take all necessary precautions to keep people away from the area and call reputable cesspool service company immediately. At Norsic, we give such calls top priority.

Consider replacing older systems with modern components that are less suseptible to problems and far more safe. If you are planning a project involving excavation on your property, try to replace the cesspool at the same time. It can save significant time and money.

Block Cesspool Collapses
If you have property in eastern Long Island that was developed prior to 1980, there is a good possibility that your underground septic system componants (cesspool and/or septic tank) may be deteriorating and subject to collapse.

Reflecting on this blog posting I seem to have a growing attraction repulsion fascination happening with “stuff” that should remain in the ground – or at least out of sight. Is this what it means to grow-up? Seeing the ugly under buggy of the beautiful clean façade?