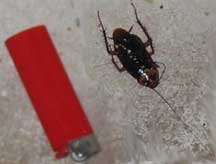 After freaking out last week and trapping two of the “Palmetto” bugs under bins in the kitchen I had to call the exterminator. When he arrived he told me that the bugs were accidentally in the house – probably entering through an open window. “They are harmless, although they have been known to chew on babies.” He told me. Reassuring.

I had him spray the house’s foundation and each room just in case other beasts “accidentally” entered the house. Sure enough, within the next 48 hours there were about ten carcasses in the garage and maybe four or five more around the house. Let’s be real, these are cockroaches on steroids. But I won!

Since Stephen was away I didn’t much care to pick up the carcasses from their various resting spots inside the house. Being a neat-y he would have picked them up, but not me. I just avoided those areas. One carcass went missing and I was sure that either the house was haunted or his family came to take away the carnage. Today I discovered the curled up crustacean in Tika’s litter box. Did the ghost put it in there?

Note from my brother Matthew:
"They aren't crustaceans, they're arthropods."