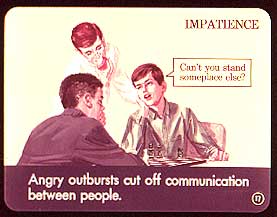 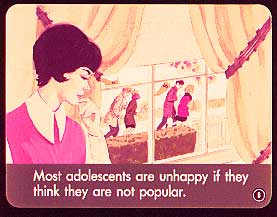 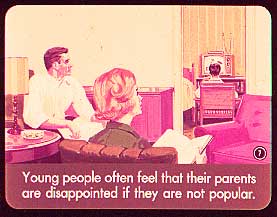 Remember those educational films they showed us in school? We had them for sex ed and also driver's ed. Anything with "ed" in the class title. Aurora Picture Show hosted A/V Geeks this weekend for a double header program called Sin & Redemption. Skip, the curator and collector of these discarded school and government flicks, has a collection of 18,000 archived in his house. Each year Aurora brings him out and he delights audiences with a curated series based on a theme.

The first evening Drinky Drink was films about the positives and negatives of alcohol. We screened it in a brewery. The second evening Creepy Christian Cinema was at the Aurora Church and it featured religious films.

To launch each program Skip shows an educational film strip and has audience members take turns reading each screen. Were they serious when they made this stuff? The best part of the evening is the 16mm film projector which has that wonderful "click click click" sound.

I got a copy of "It's Wonderful Being a Girl" which reminds me of that awful moment in elementary school when they called the girls into the auditorium, put paper on the windows, and showed us the menstruation films. Still gives me the creeps.