Why I am in Mexico City 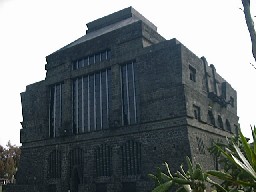 Let me back up and explain that I am in Mexico City as a guest of the Frida Kahlo Museum. Earlier in the year I facilitated a loan of a Diego Rivera and Frida Kahlo set of paintings between the University of California San Francisco School of Medicine and the Museum. On Monday the paintings come down and I am here to view the exhibition prior to their removal.

Alejandra, the Assistant to the Museum Director, hosted me today at the Museum and drove me around the crazy streets to visit two others as well. I was totally amazed by the exhibition which focuses on the relationship between Frida, Diego and Dr. Leo Eloesser who became their friend while working at the San Francisco General Hospital. The exhibition has Frida's medical supplies from her many surgeries, includes numerous photos of the doctor as well as letters between the two life-long friends. Okay, I was really psyched because I was thanked in the exhibition signage. It was totally cool even if they were creative with the spelling of my last name.

We also had the opportuntiy to visit Annahuacalli which is Diego Rivera´s museum - seen in the temple-like photograph. It houses a collection of aztec and mayan artifacts and is constructed of volcanic rocks. Beautiful to see and touch. In it are also some of the sketches for his international murals, many of which have been lost or removed.

Being here reminds me, again, of why Mexico City is one of my favorite places to visit. The people are friendly, even if I don't speak Spanish, the sites are overwhelming, the arts are accessible and the colors are shocking. Plus all the animals - they run around the streets, houses, museums, parks and sometimes pee on the roofs, which I witnessed today both in site and smell.