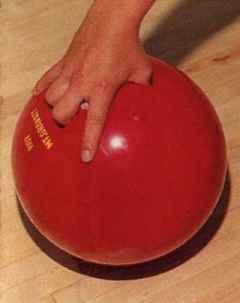 Last week Stephen’s office went out for a semi-annual bowling party and spouses/significant-others were invited. I won the dubious honor of the lowest score, which actually came with a prize. The real prize is the 18” trophy that goes to the highest scorer. The talented winner displays the trophy on their desk until the next competition.

Obviously I’m not a bowling expert, having won the lowest score prize now twice in my life – the first time when I was eight. But I do think I know which fingers to use in the ball. Stephen and I conferred after the match and he was using an interesting and challenging combo of the three center fingers. Hum, no wonder his attempts at scoring kept ending up as gutter balls. After much discussion I attempted to find the real deal on the Internet to no avail. My brother Matthew found this great President Bush making the “Hook ‘em horn” solute. 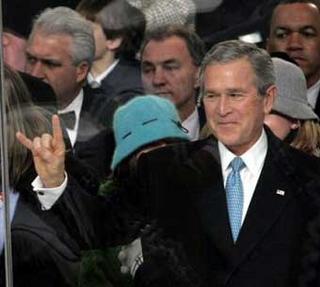 Note the Associated Press quote under the Bush photo. Does it get any better than this?