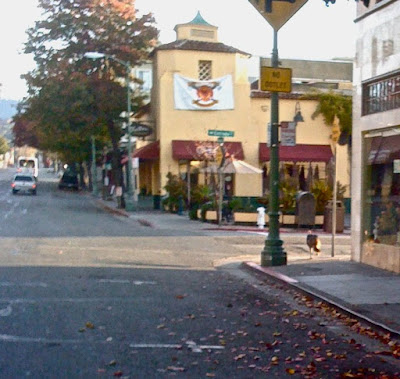 Com/Calm and I went for an early morning walk and to our shock, and that of some other early-risers along Oakland's Piedmont Avenue, there was a wild turkey running down the street. He actually tried to stop a city bus and get on to escape. The bus finally got around Mr. Turkey who then started squawking as he ran down the center of the street, then on to the sidewalk and then across the street. The few cars on the street stopped to watch the bizarre and ironic site. Mr. Turkey impressed us all by puffing out its feathers.

I've cropped this iPhone photo so that you can see the turkey running along the sidewalk towards Fenton's Ice Creamery. He's about to cross the street. Run turkey, run.