Watching @unfnshdspaces to Prep for October #Journey to #Cuba


Last year I discovered the documentary Unfinished Spaces and it peaked my interest in meeting Cuban artists and learning about creative ventures. This is the story of Cuba's ambitious National Art Schools, designed by three young architects in the wake of Castro's Revolution, then nearly forgotten, and ultimately rediscovered as a visionary architectural masterpiece.

Join me in Cuba this October - @NandaJourneys has arranged meetings with creatives so that we can learn and share. Unfortunately, the trip has been cancelled.

Unfortunately, the trip has been cancelled.

I am leading an #Arts #Management #Journey coordinated by @NandaJourneys. View the itinerary and travel info here. 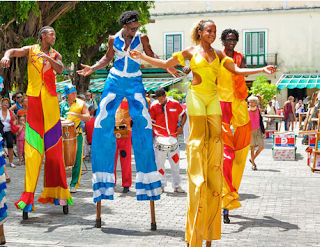 When I first started this blog in 2005 I began a list of all the books I read from start to finish. Now that I am redesigning the blog into a more functional website this list just doesn't fit on the homepage. However, it is a record that I am keeping as post because looking back on these titles, reminds me of periods in my life. They are in reverse chronological order. Some have links to Amazon or other places to purchase the book.

The Orphan Master's Son by Adam Johnson (Read during SIP)
Dress Your Family in Corduroy and Denim by David Sedaris
*Born a Crime by Trevor Noah
Victoria and Abdul: The True Story fo the Queen's Closest Confidant by Shrabani Basu
**Tiny Beautiful Things: Advice on Love and Life from Dear Sugar by Cheryl Strayed
*Wonder by R.J. Palacio
Bossy Pants by Tina Fey
**Loving What Is by Byron Katie
**Come as You Are: The Surprising New Science that Will Transform Your Sex Life by Emily Nagoski, Ph.D.
**The Art of Possibility by Rosamund Stone Zander and Benjamin Zander
The Gratitude Diaries: how a year looking on the bright side can transform your life by Janice Kaplan
**A Million Little Pices by James Frey
**The Wild Muir: Twenty-one of John Muir's Greatest Adventures
*Gratitude by Oliver Sacks
The Girl with the Pearl Earing by Tracy Chevalier
**Catfish and Mandala A Two-Wheeled Voyage Through the Landscape and Memory of Vietnam by Andrew x. Pham
*A Man Called Ove by Frederick Backman
!Yo! by Julia Alvarez
**Tattoos on the Heart by Father Gregory "G-Dog" Boyle
The Butler A Witness to History by Wil Haygood
**Panther Baby by Jamal Joseph
Medium Raw by Anthony Bourdain
**The Power of Now a Guide to Spiritual Enlightenment by Eckhart Tolle
*The Botany of Desire by Michael Pollan
The Happiness Track by Emma Seppala
**Waiter Rant by Steve Dublanica
Kitchen by Banana Yoshimoto
*Go Set a Watchman by Harper Lee
*Fear of Flying by Erica Jong
My Name is Asher Lev by Chaim Potok
*My Father the Pornographer by Chris Offutt
*Dreaming in Cuban by Cristina Garcia
Inferno by Dan Brown
The Last Lecture by Randy Pausch
*The Pursuit of Happiness by Chris Gardner with Quincy Troupe
**How I Learned to Cook edited by Kimberly Witherspoon and Peter Meehan


*First Intelligence: Using the Science and Spirit of Intuition by Simone Wright


Hell's Angels: The Strange and Terrible Saga of the Outlaw Motorcyle Gangs by Hunter S. Thompson


Winner of the National Book Award A Novel of Fame, Honor, and Really Bad Weather by Jincy Willettby


*The Natty Professor by Tim Gunn


*How We Learn: The Surprising Truth About When, Where, and Wy It Happens by Benedict Carey


**Mozart in the Jungle by Blaire Tindall


The Mambo Kings Play Songs of Love by Oscar Hijuelos


The Glimpses of the Moon by Edith Wharton


The End of Fashion by Teri Agins


*The Lady in Gold: The Extraordinary Tale of Gustav Klimt's Masterpiece, Portrait of Adele Bloch-Bauer by Anne-Marie O'Connor


**My Beloved World by Sonia Sotomayor


Something Rising (light and swift) by Haven Kimmel


The Alchemist by Paulo Coelho


Bless Me, Ultima by Rudolfo Anaya


**The Madonnas of Leningrad: A Novel by Debra Dean


The White Tiger by Aravind Adiga


*In One Person by John Irving


The Art of Fielding by by Chad Harbach


Vanity Fair's How a Book is Born: The Making of The Art of Fielding by Graydon Carter and Keith Gessen


*The Sense of an Ending by Julian Barnes


**Legacy of Love: My Education in the Path of Nonviolence by Arun Gandhi


**The Immortal Life of Henrietta Lacks by Rebecca Skloot


*Budhha in the Attic by Julie Otsuka


Under the Skin by Michel Faber


Living to Tell the Tale by Gabriel Garcia Marquez


The Space Between Us by Thrity Umrigar


*Buddha: A Story of Enlightenment by Deepak Chupra


*The Gift of Rain by Tan Twan Eng


*The Help by Kathryn Stockett


**Getting the Love You Want by Harville Hendrix


**Island Beneath the Sea by Isabel Allende


Nonviolent Communication: A Language of Life by Marshall B. Rosenberg


**The Sum of Our Days by Isabel Allende


The Waiting by Ha Jin


*The Lost Symbol by Dan Brown


**The Man Who Listens to Horses by Monty Roberts


The Art of Racing in the Rain by Garth Stein


*The Leadership Challenge by Kouzes & Pousner


From Dead to Gone by Charlaine Harris


*Dead in the Family by Charlaine Harris


**The Lacuna by Barbara Kingsolver


*Dalai Lama, My Son: A Mother's Story by Kiki Tsering


*The Places That Scare You by Pema Chodron


The Lightening Thief by Rick Riordan


A Case of Lone Star by Kinky Friedman


The Seas by Samantha Hunt


Here on Earth by Alice Hoffman


**Fall on Your Knees by Ann-Marie MacDonald


Dead to the World by Charlaine Harris


*The Solist by Steve Lopez


When You Are Engulfed in Flames by David Sedaris


*Dead and Gone by Charlaine Harris


*Lost in Translation by Nicole Mones


The Elegance of a Hedgehog by Muriela Barbery


*The Diving Bell and the Butterfly by Jean-Dominique Bauby


Somewhere Towards the End by Diana Athill


Charlaine Harris, Dead as a Doornail


The Gilda Stories by Jewelle Gomez


**Portrait of Myself by Margaret Bourke-White


Memories of My Meloncholy Whores by Gabriel Garcia Marquez


Balzac and the Little Chinese Seamstress by Dai Sijie


*Dress Your Family in Curduroy and Denim by David Sedaris


*Nickel and Dimed by Barbara Ehrenreich


Outliers: The Story of Success by Malcol Gladwell


Inheritance of Loss by Kiran Desai


Dead Until Dark by Charlaine Harris


*The Art of the Turnaround: Creating and Maintaining Healthy Arts Organizations by Michael M. Kaiser


*First Darling of the Morning: Selected Memories of an Indian Childhood by Thrity Umrigar


*The Island by Victoria Hislop


**The Handmaid's Tale by Margaret Atwood


*The Brief Wondrous Life of Oscar Wao by Junot Diaz


Bait and Switch by Barbara Ehrenrick


Breakfast at Tiffany's by Truman Capote


*The Samurai's Garden by Gail Tsukiyama


The Porcupine Principle (thoughts on non-profit fundraising) by Jonathan Farnhill


Five Life Stages of Nonprofit Organizations: Where You Are, Where You’re Going, and What to Expect When You Get There by Judith Sharken Simon


*Oh The Glory of it All by Sean Wilsey


Four to Score by Janet Evanovich


*Lord of the Flies by William Golding


*The Dance of Anger: A Woman's Guide to Changing the Patterns of Intimate Relationships by Harriet G. Lerner, Ph.D.


*Growing Up by Russell Baker


The Photograph by Penelope Lively


The Witch of Portobello by Paulo Coelho


*The Bonesetter's Daughter by Amy Tan


The Boleyn Inheritance by Philippa Gregory


*The Other Boleyn Girl by Philippa Gregory


*The Audacity of Hope by Barack Obama


*A Spot of Bother by Mark Haddon


The Autograph Man by Zatie Smith


City of the Beasts by Isabel Allende


*Then We Came to The End Joshua Ferris


*The Long Tail by Chris Anderson


Watching the English: The Hidden Rules of English Behaviour by Kate Fox


The Book Thief by Markus Zusak


Salmon Fishing in the Yemen by Paul Torday


The Kite Runner by Khaled Hosseini


Bambi vs. Godzilla by David Mamet


*The Infinite Plan by Isabel Allende


Water for Elephants by Sara Gruen


*The Hippopotamus by Stephen Fry


The Big Moo by Seth Godin


Yiddish with George and Laura by Ellis Weinder and Barbara Davillman


The World According to Bertie by Alexander McCall Smith


The New Leaders by Daniel Goleman


*Cirque de Soleil the Spar: Igniting th eCreative Fire That Lives Within Us All by John U. Bacon and Lyn Heward


The Leadership Pipeline: How to build the leadership powered company by Ram Charan, Stephen Drotter and James Noel


A Short History of Nearly Everything by Bill Bryson


**The History of Love by Nicole Krauss


The Hornet's Nest by Jimmy Carter


A Man Walks into a Room by Nicole Krauss


Of Love and Other Demons by Gabriel Garcia Marquez


The Thunderbolt Kid by Bill Bryson


Neither Here no There by Bill Bryson


The Bedroom Secrets of Master Chefs by Irvine Welsh


A Long Way Down by Nick Hornby


*A Short History of Tractors in Ukrainian by Marina Lewycka


Running with Scissors by Augusten Burroughs


**All the King's Men by Robert Penn Warren


Watership Down by Richard Adams


The Namesake by Jhumpa Lahira


*Interpreter of Malades by Jhumpa Lahiri


The Log from the Sea of Cortez by John Steinbeck


Searching for Steinbeck's Sea of Cortez by Andromeda Romano-Lax


The Essential Drucker by Peter Drucker


*Love in the Time of Cholera by Gabriel Garcia Marquez


Before and After by Rosellen Brown


*A Walk in the Woods by Bill Bryson


The Porcupine Principle (thoughts on non-profit fundraising) by Jonathan Farnhill

Join me for 90-minutes of relaxation, renewal and restoration: 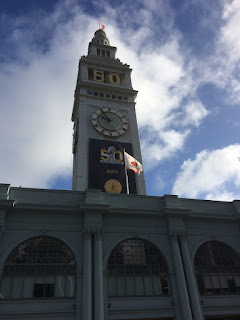 San Francisco is getting ready! 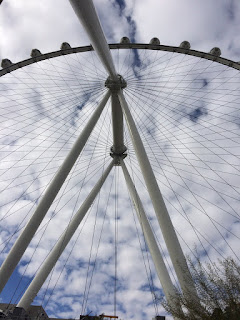 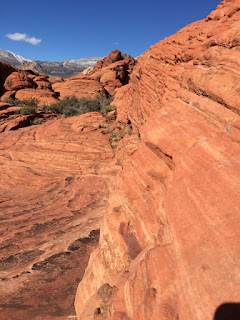 Brian and I are in Las Vegas and have not even once visited the strip. Viva Las Vegas.