Adventure in the Carribean High Seas 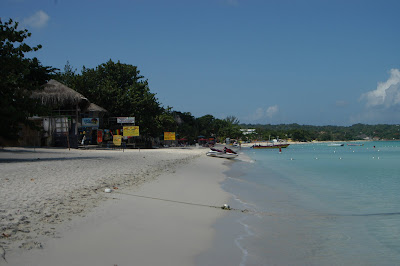 Day three was more water sports adventures. The water was so warm and placid and the sand white and soft. I started out with a snorkel and raft and paddled around our swimming area with my head in the water as I floated around. Not a single fish but it was very peaceful and also very sunny. Even with 50 SPF sunscreen I got burned on my shoulders. The sun was so bright that it was difficult to get good photo exposures - especially since the local people are so dark and you have to overexpose to capture the richness of their skin. 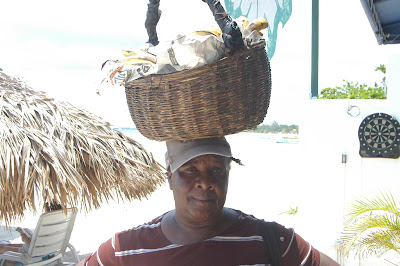 Later I wandered along the beach and bought a coconut from Mama who so generously opened it up for me, let me drink the water and then removed the meat so that I could munch on it trouble free - plus take her photo - all for $7. I looked at it as a cultural experience and then the price didn't seem quite as outrageous. 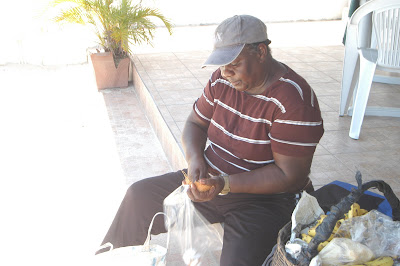 At 4pm I joined Ian, Soccer and their self proclaimed "hustler" friend Yellow Man and five of my fellow resort guests on a sunset "cruise". (I keep using quotes because although these were the words they used to describe our activities believe me they were on the rustic end of the definition.) Again Wendy was amazed that I just got on a boat with no idea of our destination. I wasn't bothered. Wendy and Azreal again had their snorkel gear so I figured we could only be doing something fun. Then I found out that they didn't know what we were doing either.

This time we went out to the Western most point of the Island and were no longer protected by the calm of the natural bay. Suddenly we were in huge waves heading out past coral cliffs lined with dream get-aways. We passed a couple getting married on the cliffs - beautiful and romantic. I would have taken photos but my camera would have gotten as soaked as me.

As the boat rolled and creaked up and down the giant waves we started to wonder if we were going to make it to our mystery destination. Along the way we passed a giant sea turtle bobbing up and down in the tempest with his head peaking out above the waves. Yellow Man was driving the boat and we were none too confident with his captain-ing abilities. Ian was carefree as he lounged on the bow admiring Azreal's fishing gear. Finally we reached a lighthouse which was apparently our destination - but actually not. Yellow Man negotiated the boat along the crashing waves to the cliffs and then took us into a cave which was filled with bats and smashing waves. 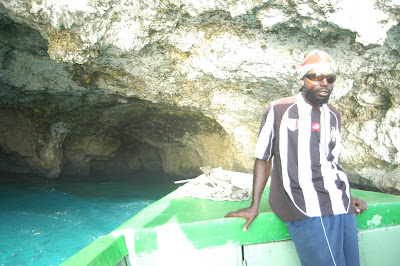 We were impressed but eager to leave. Do they do this every day? I was reassured of my lack of assurance when Wendy and Azreal were also nervous - especially since they live on the beach in Florida and deep sea fish all the time.

We turned around and I thought we would find a quiet place to drop anchor and snorkel. Boy was I wrong. Our destination was actually a famous place I never heard of called Rick's Cafe. It looked more like a movie set than a cafe. 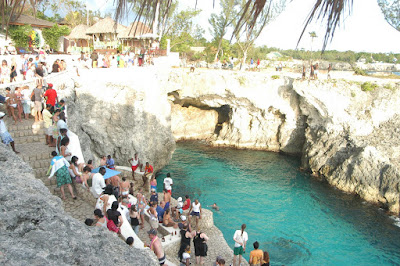 Somehow we were going to get our boat through the crashing waves to the cliffs, while avoiding crazy drunk people who were jumping into the water. Then we would somehow have to get out of the boat and join the masses. Frankly, I wanted to stay on our boat but then again the waves were so high that that wouldn't have been the best choice either. So, our little group, which had now bonded since we had all chosen our resort for its non-resort feel, reluctantly joined the masses. I kept calling it Hedonism but actually there was a nude resort down the island called Hedonism. 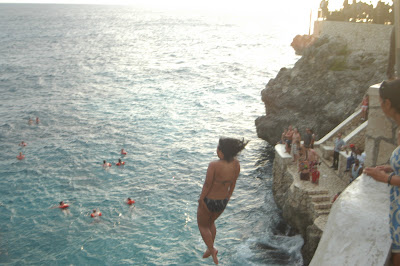 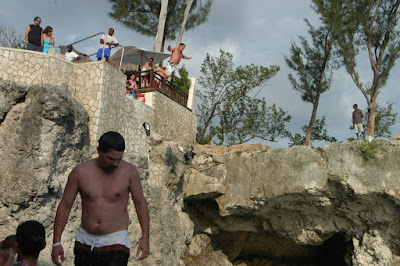 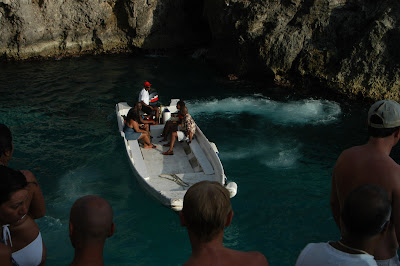 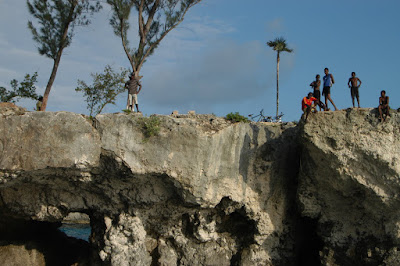 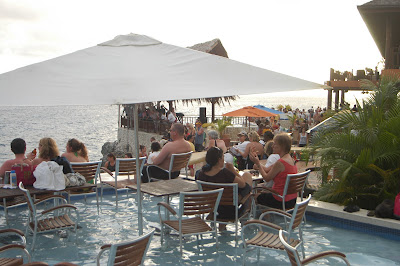 The highlight of Rick's is the "professional" cliff jumpers. These are two guys who look like twin Olympic divers. They climb up onto a rickety old tree high above the high cliffs and then do crazy dives into the water. Of course each dive is introduced with a call for Tips - anything to make a buck. Here they are next to me doing gymnastics to get attention for their big show. 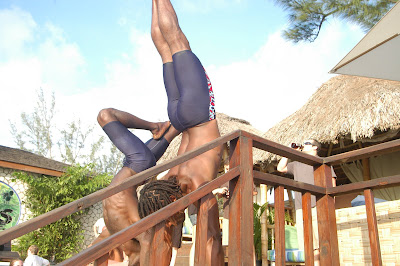 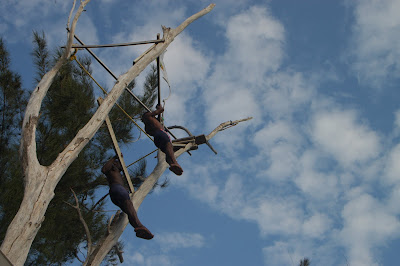 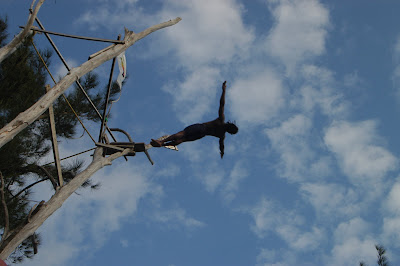 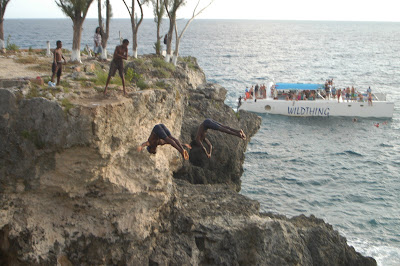 What a scene! Spring Break Gone Wild. and this was the quiet season. People must have lost their minds. Local boys were standing on the cliffs screaming "Five Dolla and we jump" while crazy drunk people stupidly plunged into the water somehow avoiding coral cliffs and each other in the water. Add to that the boats that were carelessly ferrying people to the stairs. I asked one of locals who was hanging out if anyone ever got killed and he said that every day the ambulance came.

I was amazed by the variety of people. So many languages being spoken and people of all ages and all levels of sun burn. Children, teens, 20s, 30s, 40s and believe me some wasted folks in their 50s, 60s and 70s. It was true pandemonium. To add to the scene there was a party boat called Wild Thing that couldn't get into the jumping zone so instead a bunch of drunk people jumped from the boat and swam into the area. These photos track their progress from party boat, to the cliffs in the crashing waves and to the diving area where they were certain to have some jumping person land on their heads. 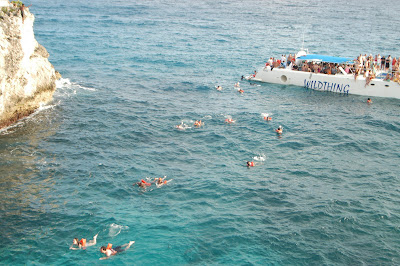 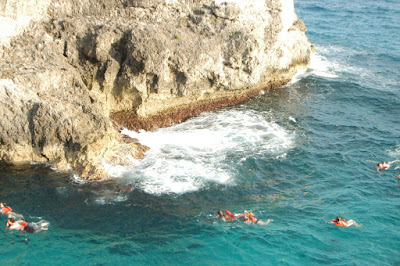 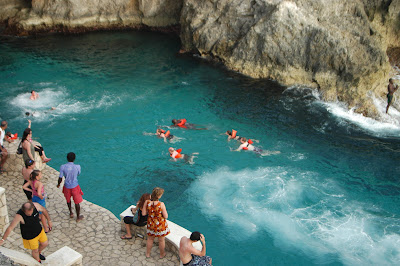 No one seemed to be in charge or worrying about safety. There was one Adonis looking guy who was doing all kinds of back flips that did seem to take a bit of control at least to get people to jump or get off the plank. Here he is doing a black flip a few feet from the coral cliffs. 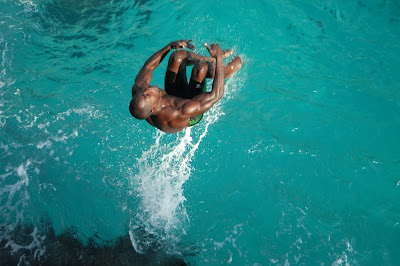 After an hour Soccer and Yellow Man rounded us up and Ian brought around the boat. We bravely jumped back on to our ship and happily scurried out to sea. The trip back was so much calmer and Soccer caught another fish while Yellow Man wrangled some of the others to a disco.