I Have Something To Tell You 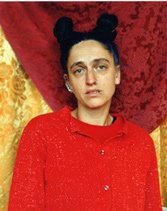 One of the current exhibitions at the Houston Center for Photography, I Have Something to Tell You features photographic portraits by artist Adrain Chesser. Deliberately displayed without a written artists statement or labels the viewer is encouraged to instead sit in front of a backdrop, the same one used in the portraits, and to put on a headset to listen to the artist’s narrative on a CD player.

I facilitated a panel discussion with Adrain to explore why he came out to his family and friends in this way. Adrain revealed that at first he was going to keep his illness a secret but realized that this was causing him more pain and illness. By bringing his personal community into the studio and placing himself behind the camera he created a ritual that allowed him to repeatedly reveal his condition in a way that made the statement tolerable.

After shooting the images Adrain placed them on the walls of his studio. The faces staring back at him were too much and he had to take a break from editing and composing the exhibition. But eventually he faced the portraits and realized that each person would listen, react, disappear and then return. For Adrain that return was the most important phase of the experience. He had not lost them forever, which was his greatest fear. For his friends and family the fear was reciprocal.