Here's the zoo crew of guys I took to the game on Friday night. Jeff (left) brought an '89 World Series ball and managed to got it signed. He has a way of setting a goal and achieving it - when it comes to meeting people and being places.

My "oldest friend" meaning that we've been friends for decades is Hal, wearing the fashionable black cap. He and Jeff talked baseball history all night long. It was a trip to see Hal and Jeff chatting - two worlds colliding. 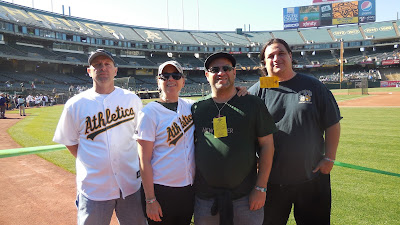 Louie, on the right, is Jeff's childhood friend and filled the evening with funny wise cracks. His topic of focus was how I had "balked my chance to ask Balfour out on a date". Really? Would that beautiful baseball player, who has women, and probably men, falling at his feet, really want to go on a date with me? What would we talk about? The Balfour Rage?

While signing my glove Balfour looked none-too-impressed when I told him it was the glove I used playing baseball when I was a little girl. Louie said I should have showed him my tattoo instead. What tattoo? Louie was living his own baseball fantasy. Or, maybe he wanted Balfour's arm around his shoulder.