Designers as Constant Arrangers and Vignette-Builders

Today's New York Times' Home section has an article about Best Made Company's Peter Buchanan-Smith and his change of career from graphic designer to ax designer. I found this piece hugely inspiring as it is about living your dreams - taking all of the seemingly-random experience in your life (at least that's how my life feels) and building up to something so simple and satisfying as designing a useful tool.

I especially like one of the article's photo captions which states, "Designers like Mr. Buchanan-Smith don't just have 'stuff'. They are constant arrangers and vignette-builders. One a window sill: a plumb bob, a bottle of cogne, a moth." Sounds a lot like my design aesthetic. 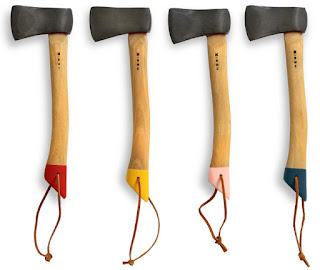 Buchanan-Smith is also brave to publicly share his many life-changes including divorces from his wife and also his business partner. Out with the old and in with the new.