And Then There was Light 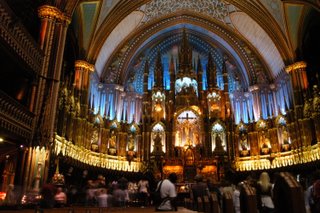 Montreal’s Notre-Dame Basilica understands how to target a segment of the tourism market. Yes, they will always have the visitors who search it out, but what about the folks who want entertainment with a high production value?

The Basilica has created a slick production that pulls visitors into its space after dark and with a high ticket price. For 10$ Canadian you get 35 minutes of pure entertainment. The production And Then There Was Light wraps the sanctuary in sail-like drapes onto which films are projected. Although the presentation and content of the films themselves is a bit cheesy you do get interesting historical information. Audience members wear headsets that present the audio in either English or French while the musical soundtrack is broadcast from the central speaker system and occasionally features the pipe organ.

As I watched in wonder at the high tech presentation, which included multiple projectors, light enhancements, sophisticated audio, and retractable drapes, I couldn’t imagine that the church would allow this kind of access to their facility. Turns out that the church created the production and hires technicians to run the show. It is now in its fifth year and the seats were 80% full on a Friday night.

After the performance we were invited to spend time viewing the Basilica. The iconography had a deeper meaning following the production and people lingered, some prayed, and many took photos of the spectacular facility.

The production pulls in new visitors, perhaps attracts new members, educates the public, and adds to the coffers. Instead of closing its doors at sunset it creates a light from within that attracts audience members, such as myself, who were simply wandering past. As I eagerly purchased a ticket I asked the box office person to get me to the church on time.